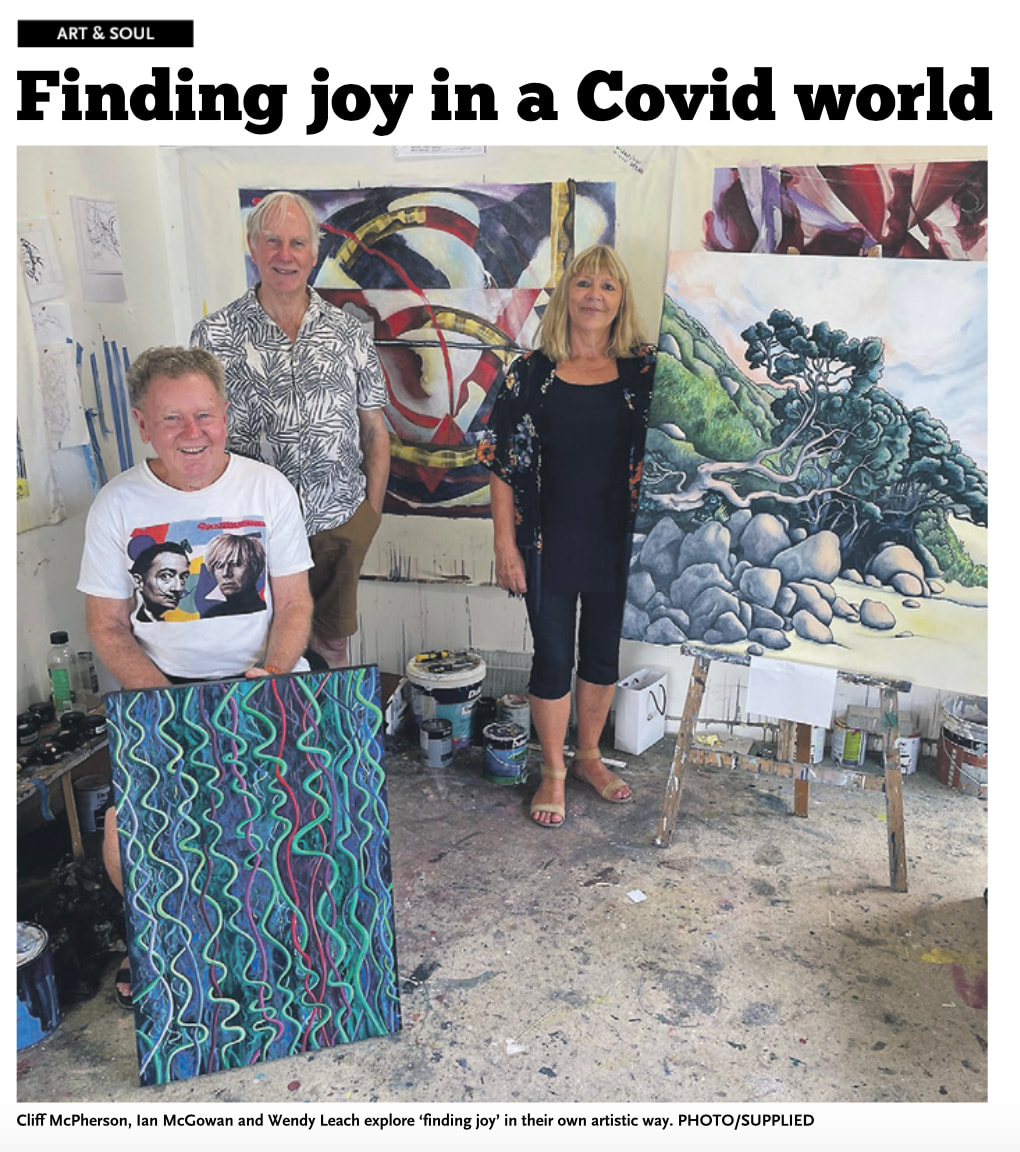 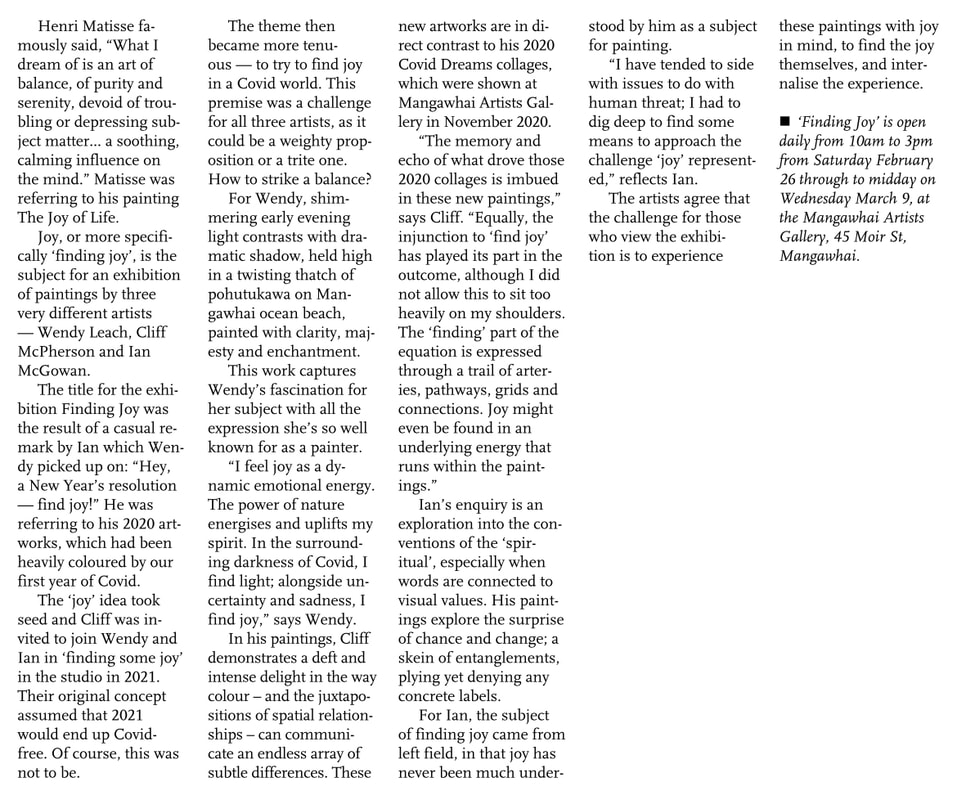 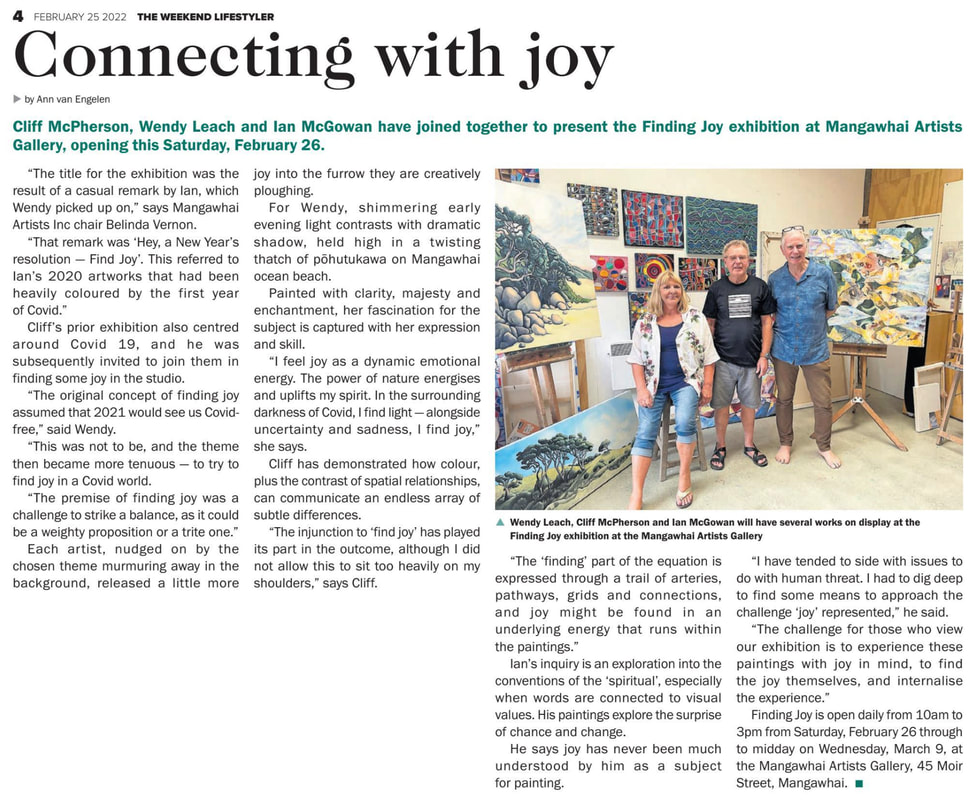 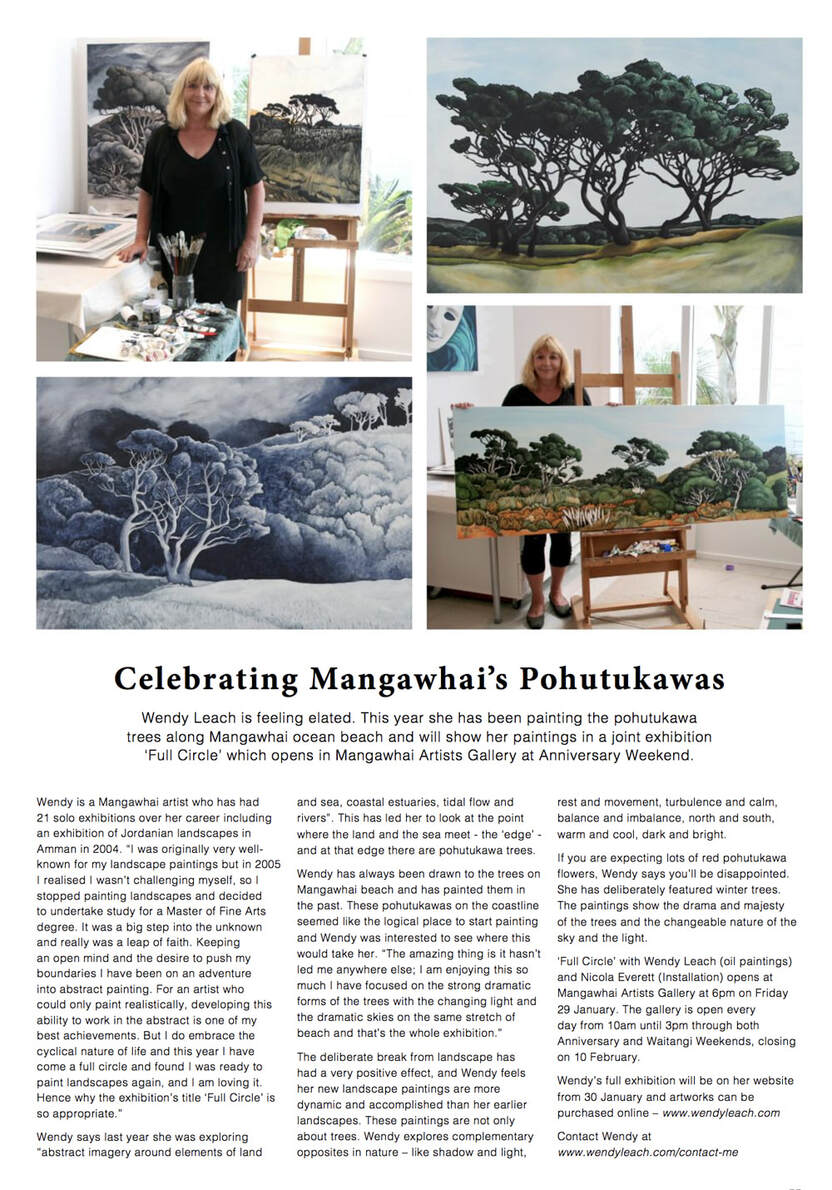 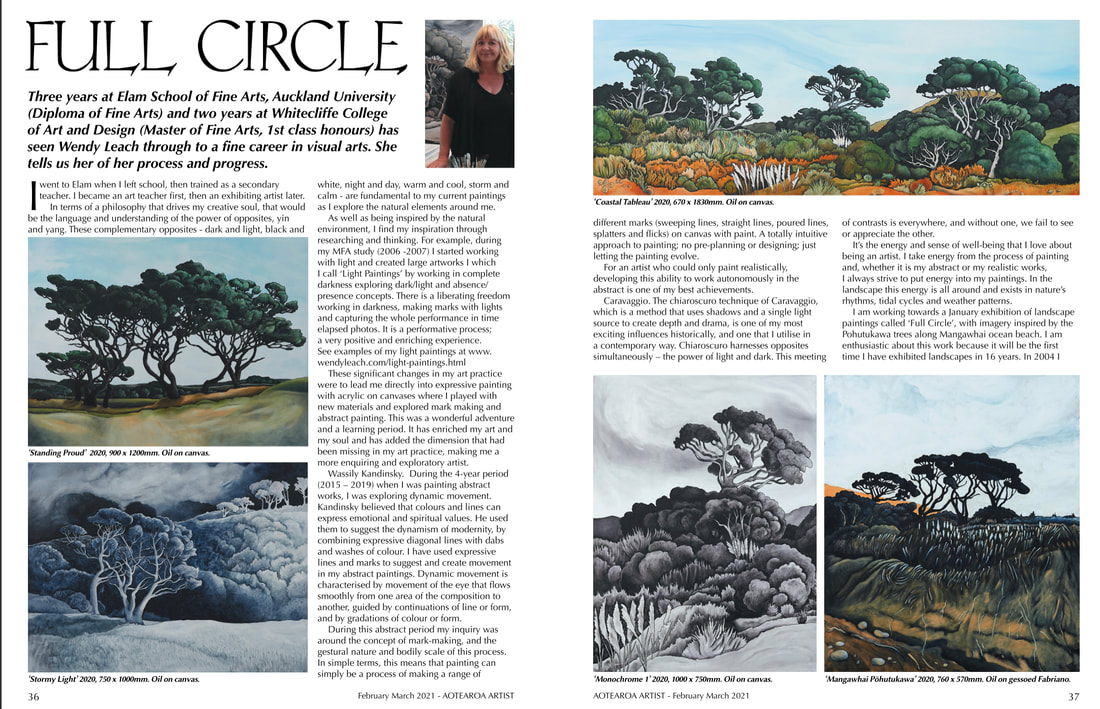 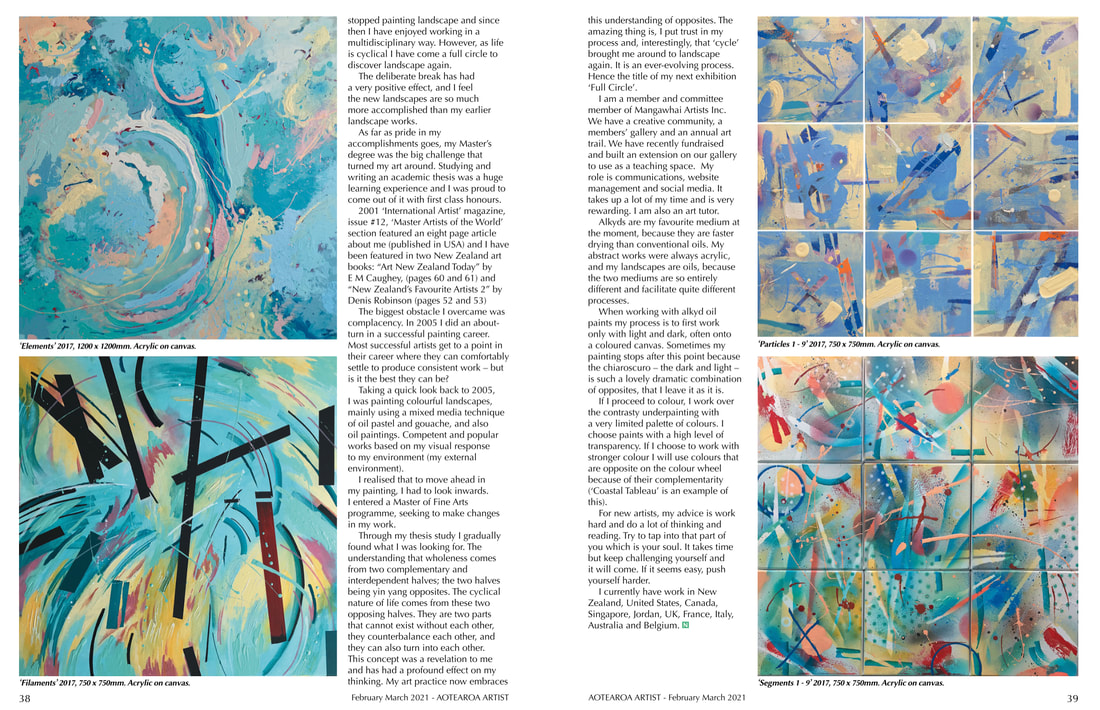 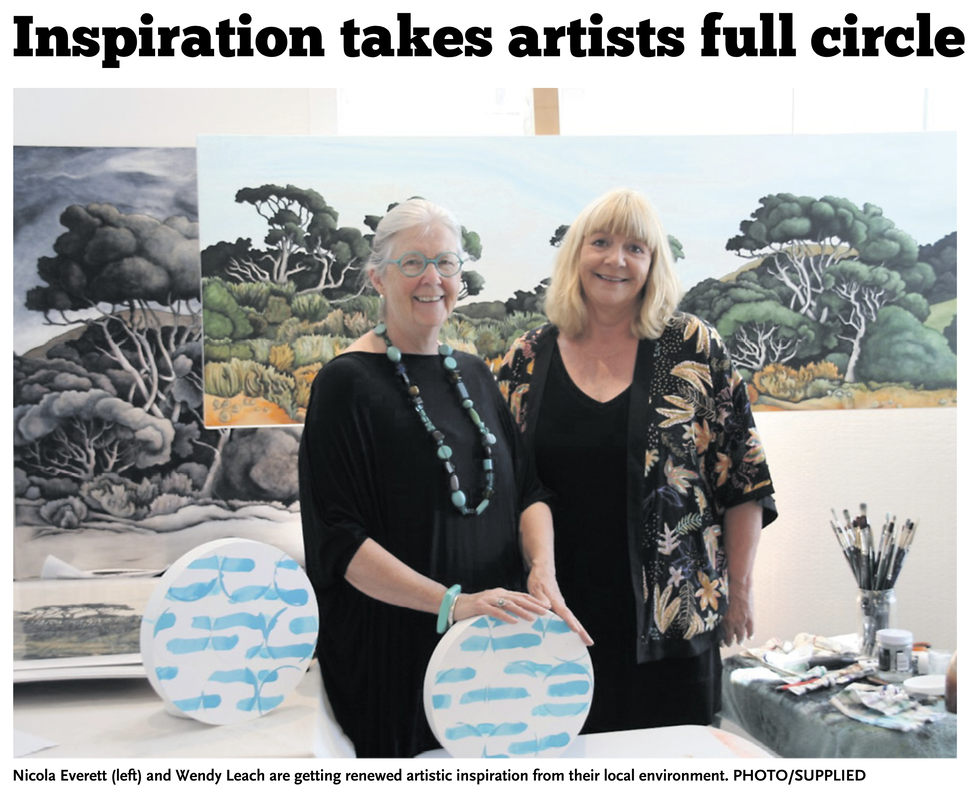 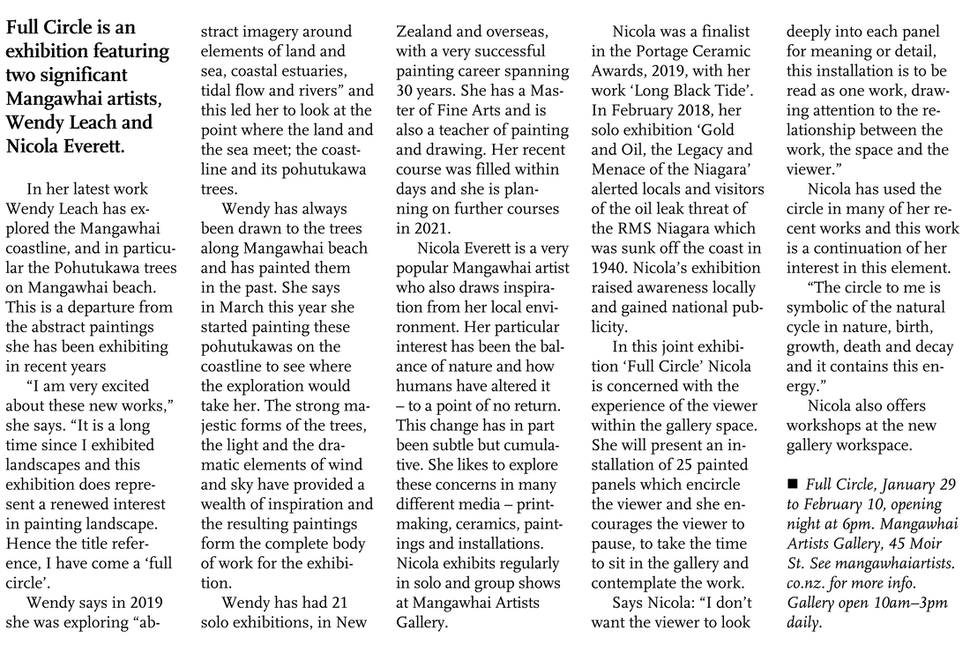 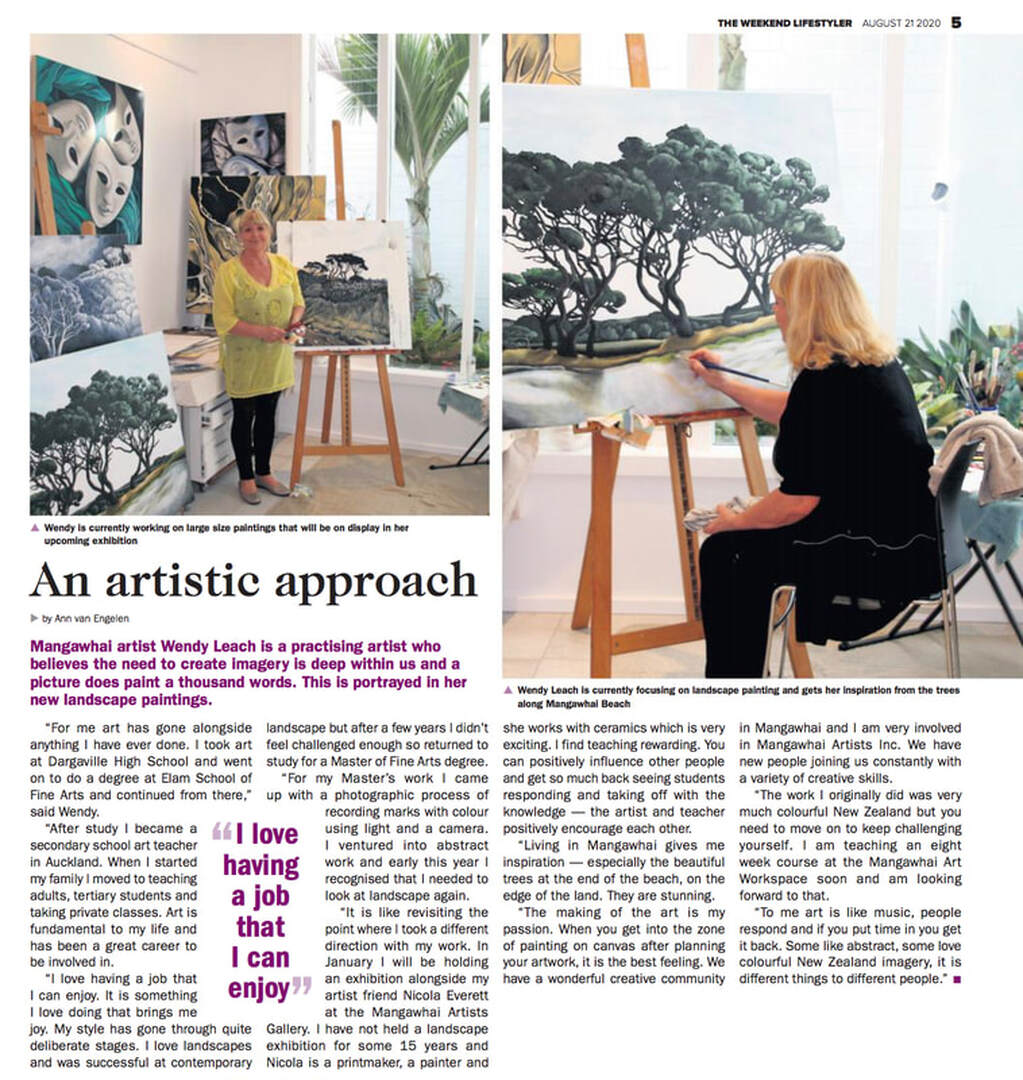 ​LARGE ARTWORKS ON SHOW AT MANGAWHAI 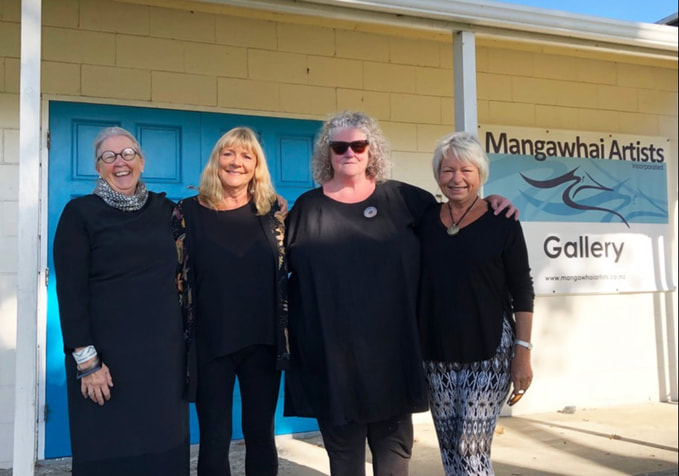 The work of four major artists highlighting ‘large works and bold art’ is on show in an exhibition that opened last Friday and runs until Sunday, May 12 at the Mangawhai Artists Gallery.
‘Four artists, four distinctive styles; this is an exhibition not to be missed', says the gallery announcement.
‘Wendy Leach, Nicola Everett, Bineta Hinton and Lynn Middleton are experienced artists who are exhibiting together for the first time.
‘Bineta’s work has grown out of her passion for “our land and our people, past and present”. The application of paint is enhanced with icons, graphic work, birds and motifs of “our place”.’
The essence of Wendy’s work is spontaneity, “I explore the possibilities of working with opposites: underlay/overlay, conceal/reveal, absence/presence, opaque/translucent,” says Wendy, “just letting the painting evolve.”
Nicola, known in Mangawhai for her Gold and Oil exhibition highlighting current risks of the RMS Niagara, (leaking oil) continues “the balance of nature and how humans have altered it — to a point of no return.” Nicola is a strong environmental advocate.
Lynn looks at the world close to home, looking for nature’s patterns, repeating lines and shapes, then makes images in still life.
​The four artists will be staffing the gallery at 45 Moir Street; Mangawhai Village; 10am–3pm daily. Entry is free.
​For more information visit mangawhaiartists.co.nz.
​​Mangawhai Focus, 29 April, 2019

ARTISTS EXHIBIT TOGETHER FOR THE FIRST TIME 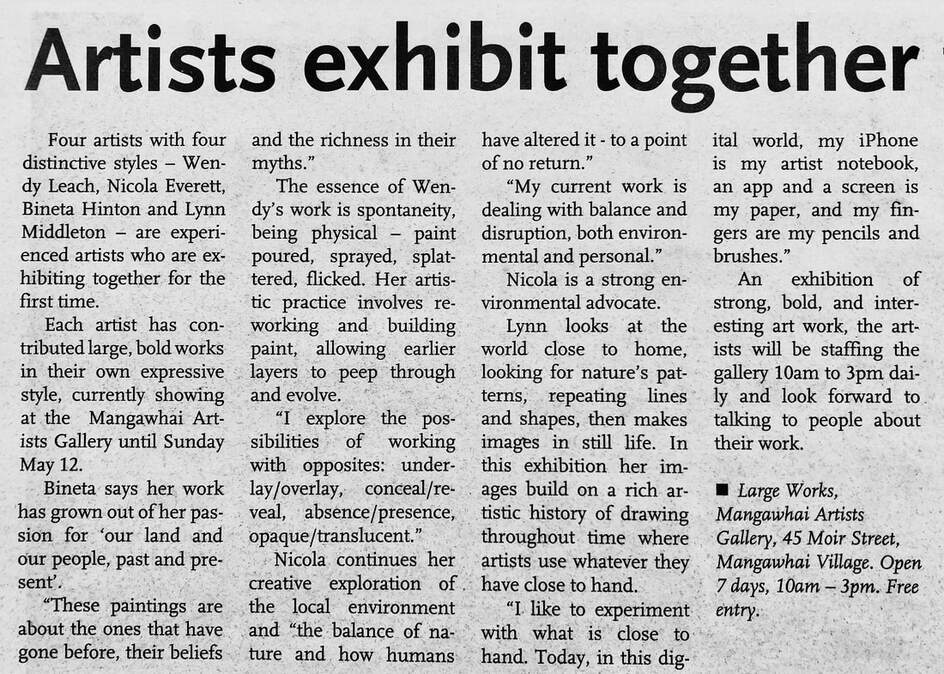 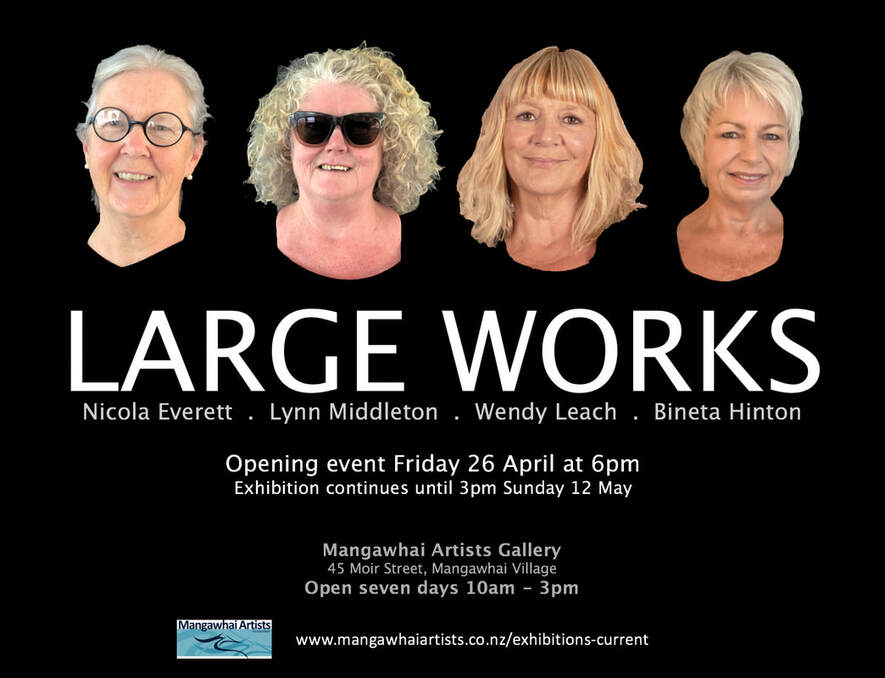 Wendy Leach is a painter and multi-media artist, whose studio is in Mangawhai Heads, north of Auckland.
​
She has a Master of Fine Arts (1st class hons) from Whitecliffe College of Art and Design, and previously gained a Diploma of Fine Arts from Elam School of Fine Arts. Wendy also has a Graduate Diploma of Secondary Teaching, and has been involved in art education in New Zealand, as well as Belgium, where she lived for six years.

As an outcome of her MFA study, Wendy produced a body of work entitled ‘TIME SPACE LIGHT’. These light paintings were first presented as large photographic prints, created by solitary performances of mark-making and painting with lights in a darkened space.

In 2017 she revisited the light painting images to create her first set of light boxes. The physical dynamic of this process has informed and strongly influenced her more recent large acrylic works on canvas. Since creating the light paintings, her ongoing inquiry has been around the concept of mark-making, and the gestural nature and bodily scale of the mark-making process.

At a recent solo show at ArtHAUS Orakei, in Auckland, she exhibited her acrylic paintings that were an exploration around ‘line’ - how lines can communicate, and what they express: the fragility and ephemerality of thin lines; the strength and solidity of thick lines; curved lines express fluid movement, whether it is calm or dynamic; lines that are horizontal or vertical appear stable; diagonal lines appear unbalanced and filled with restless energy.

Wendy will feature in our upcoming ARTWEEK show City Lights, and is also working towards an exhibition entitled ‘Large Works’ at Mangawhai Artists Gallery in opening April 2019.

More information can be found at her website www.wendyleach.com 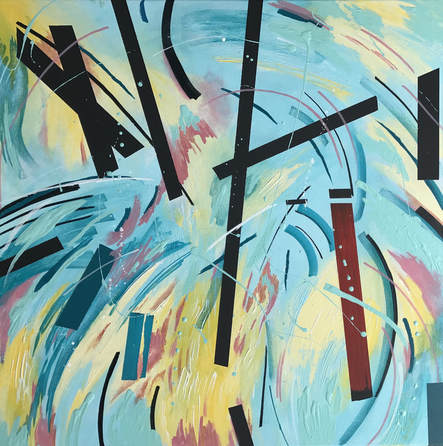 A veteran on the art circuit, Wendy Leach‘s new works have intentionally changed direction from the paintings that defined her as an artist over the last 2 decades.  Past landscapes and interiors had a strong sense of place and presence marking her travels and journeys.

Leach’s new works explode with abstract energy, new vigour and freedom after an extended European sojourn.  Her approach is intuitive - she paints autonomously, free from external influence - avoiding subject and genre yet there is structure, line and rhythm. Her mark making skills are strong as she plays with swirls, splashes and drips - perhaps evoking Pollock and Kandinsky.  There is also a strong correlation between her new painted works and her ‘painting with light’ photographic series of recent years.

Initially the new works started off on black canvas resulting in bright complementary opaque color and through gradual process, the paintings lighten, back to white canvas and high key translucent color.

This is an important exhibition signifying a new and different direction.  The show presents fresh on white walls and floor, is well curated and puts in context where the artist Wendy Leach stands creatively today.

Desiree Opiat-Prinsloo, is an artist, educator and writer, based in Sydney, Australia.
She is a Fellow of the Royal Art Society and a Member of Australian Watercolour Institute.

​From landscape to lines; an artist’s new adventure

Taking a step into the unknown is often a daunting experience for most people, however for one local artist such a journey has liberated her artistic expression and led to her first exhibition in ten years.

Multi-talented Mangawhai Heads artist, Wendy Leach, will showcase her new style - artworks that are vastly different from paintings she was renowned for over a decade ago – in a solo show appropriately titled ‘New Work’, at ArtHAUS Orakei, February 15 to March 4.

“I’ve gone from painting colourful New Zealand landscapes  to abstract works, creating intuitively with no clear composition or outcome, sometimes working with the canvas on the floor so my whole body is now moving around the painting,” Leach says. “It is very liberating.”

A graduate of both Elam and Whitecliffe College art schools as well as a qualified high school teacher, Leach has worked as a professional artist since 1996. With twenty successful, sold-out exhibitions and travel adventures around New Zealand and overseas to inspire her art, she says her career was ‘humming along nicely… life was good’.

However in 2005 Leach noticed an internal shift, a dissatisfaction with her work and she began to question herself as an artist. A dramatic change of direction was required.

As a former art teacher Leach says she would always encourage students to challenge themselves in their work and to take risks without thinking too much about the results. However she admits that taking the leap herself was a difficult thing to do.

“It’s a big jump especially when you don’t know where you are jumping too,” she says. “It’s great to have skills and use them but you sometimes have to learn how to not use them… you need to unlearn what you know.”

Leach’s search for ‘more personal relevance and artistic integrity’ led her to become a student once again. Enrolling in a two year Masters of Fine Arts, she began to deconstruct and rebuild her ideas of who she was as well as herself as an artist. The process she says ‘led to a more meaningful and personally relevant way of working’ and resulted in the liberating creation of Leach’s graduation exhibition, ‘Light Paintings’ –  photographs caught on slow shutter speed of moving coloured light –  ‘which changed my art practise forever’.

Her current work evolved directly from the light paintings and are ‘large, energetic and visually powerful’, illustrating her fascination with lines and  how different types influence one another, ‘consider the fragility of thin lines, the strength of thick lines, curved lines express fluid movement, diagonal lines appear unbalanced, filled with restless energy, perhaps even falling over’.

“As an artist I’ve just got to keep evolving,” she says. “There’s no going back.” 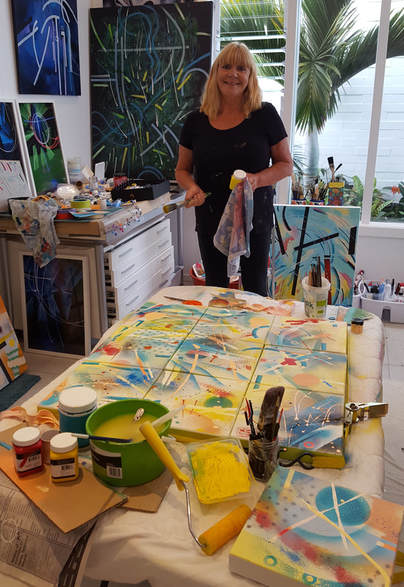 The transformation from a highly successful landscape painting career to producing art that isn’t a response to external influences but the result of “painting intuitively”, has led well-known Kohimarama artist Wendy Leach to hold her first exhibition in 10 years, beginning February 15 at Orakei’s ArtHAUS.
This hiatus in exhibiting is due to Wendy and husband Colin living in Europe for six years.
“This exhibition is personally really significant. I’m ready to show people what I’ve been doing since I found a more meaningful and, more personally relevant, way of working “ says Wendy.
Her new works are large acrylic paintings that Wendy labels as “mark making”. These new works are the direct result of the intensity of her return to University to complete her Masters of Fine Arts and the resulting challenge, as well as the opportunity to rest from intensive painting while overseas in Europe between 2009 and 2015.
The exhibition will be on show until March 4 and is open every day from Wednesdays through Sundays from 10am to 4pm (including a late night on Thursday Feb 22) at ArtHAUS, an artists’ collective and gallery, located at the entrance to Orakei Bay Village, 228 Orakei Road.
A decade ago, Wendy’s landscape painting was highly successful. She held 20 solo exhibitions of her mainly landscape paintings, and also had a successful teaching career as a secondary school art teacher, and a tutor in painting and drawing both privately and for organizations such as the Auckland Society of Arts and Outreach Auckland. She also led tours and art retreats to Italy.
“My exhibitions nearly always sold out, but I began to feel a bit like a production factory,” she says.  “While completing one commission, I was asked to paint more Pohutukawa trees in my paintings. I drew the line at that and knew I wasn’t interested in painting to order, and I needed to change direction.”
“Also, it wasn’t exciting me anymore, “she says.
So, in 2006 she returned to University and over the next two years completed a Master of Fine Arts with 1st class honours “in order to put myself back into a challenging situation and to undo everything I’d learned” since graduating from Elam in 1973 with a Diploma of Fine Arts.
It was that Masters work, both her thesis and the new way of thinking and working that resulted from her study, that was the catalyst for the shift in her painting practice, says Wendy.
Post her Masters in 2007 Wendy held an exhibition of the works that she had completed as part of undertaking her thesis. These were what Wendy calls “light paintings”.
“This was my process of making marks (sweeping lines, circles, dashes and flicks) with lights in a completely darkened space. This allowed me to freely move around in quite an uninhibited way, like ‘dancing in the dark’ “she says.
It was the freedom of that experience that changed her art practice forever.
The large acrylic paintings exhibited in her new show are the direct result of the mark-making in the “light paintings”. Wendy now works totally intuitively with paint, without planning, letting the paintings evolve. Since the first paintings using this method, she has begun using different materials and techniques.
“In the more recent pieces, most of which are included in the exhibition, I have begun using techniques such as brushing, pouring, dripping and flicking, and visitors also will see the introduction of some stencilling and spraying, “she says.
Wendy will have 34 paintings on display ranging from the very large to the very small; the largest being 1 x 1.5 metres to the smallest at 25 x 25 cm.  All have been completed in her painting studio at Mangawhai Heads, the small seaside town one and a half hours north east of Auckland. 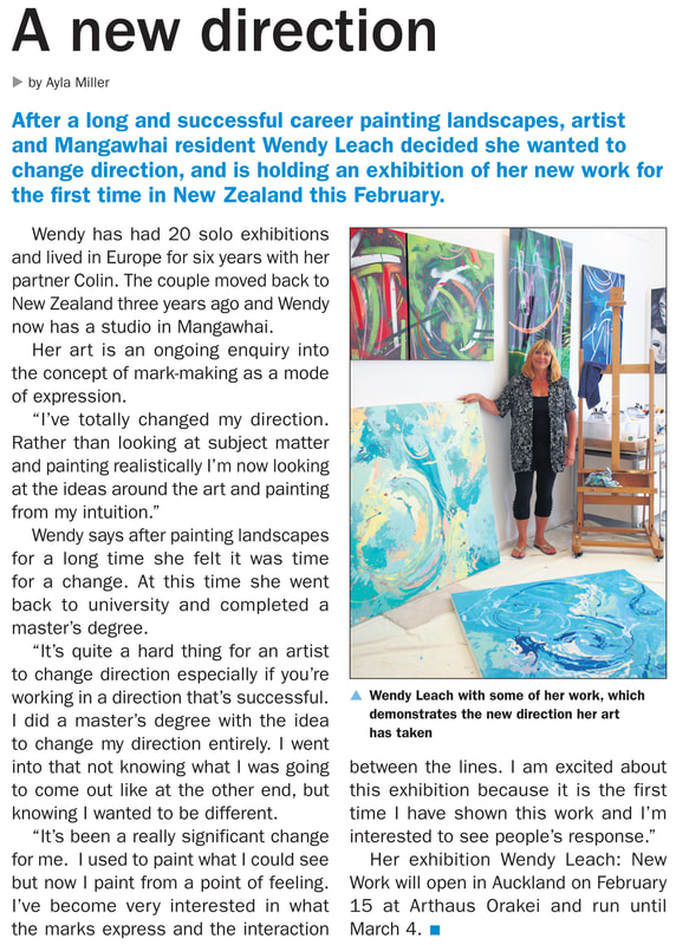